Cape May Brewing Company in Cape May, NJ and Night Shift Brewing in Everett, MA made news for a Super Bowl bet the two breweries made on the 2018 Super Bowl.  When the Philadelphia Eagles defeated the New England Patriots 41-33, Night Shift Brewing owner Mike O’Mara traveled to the CMBC tasting room to serve as bartender for a day! Now, two years later, it seems like the two breweries are collaborating yet again! 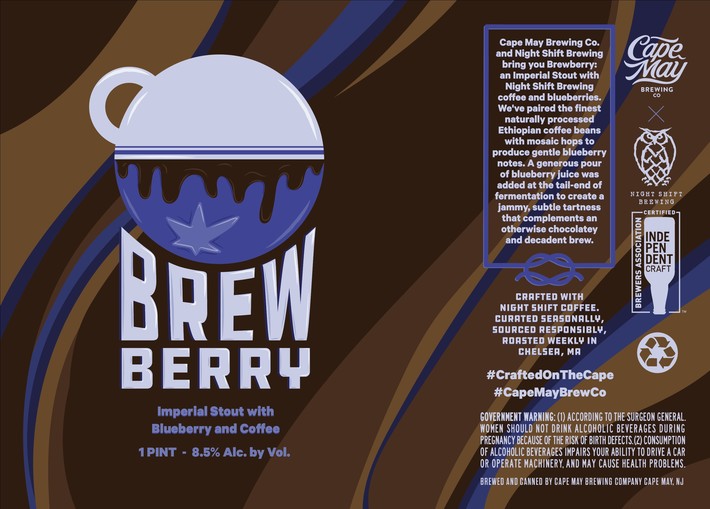 According to a filing with the Alcohol and Tobacco Tax and Trade Bureau (TTB), Cape May received approval on January 3rd for a can label for Brewberry.  Brewberry is an 8.5% ABV Imperial Stout with Blueberry and Coffee. Label art reads:

"Cape May Brewing Co. and Night Shift Brewing bring you Brewberry: an Imperial Stout with Night Shift Brewing coffee and blueberries. We've paired the finest naturally processed Ethiopian coffee beans with mosaic hops to produce gentle blueberry notes. A generous pour of blueberry juice was added at the tail-end of fermentation to create a jammy, subtle tartness that complements an otherwise chocolatey and decadent brew."

Requests for additional information were not immediately returned by Cape May.