The Arandoza Red is the newest cigar from Arandoza Cigars, which is set to release at IPCPR 2014. All of the Arandoza cigars are made at the La Zona factory in Esteli, Nicaragua. Arandoza has previously released the Blue and the White. You can hear all about Arandoza by watching their last appearance on CigarChat. 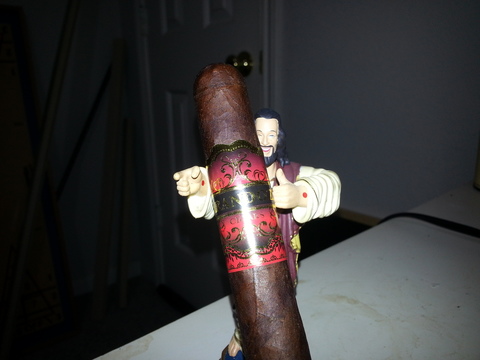 Cigars Smoked for this Review: Two per Reviewer

I love a good San Andres and its earthy notes. The Arandoza Red on first light was a total kick in the face. Not too many cigars make me say “shit this is strong”, but this did. The Arandoza Red is freaking strong from jump. There is black pepper but is less dominate than I would have expected. There are some notes of leather and baking spices which bounce in and out, but the dominate flavor is chocolate baking powder. There are some hits of red pepper as well. I am going to guess Rob probably isn’t going to enjoy the first half of this cigar.

After getting assaulted in the first half, the Arandoza Red changes to a very nice sweetness. It was a great transition and frankly much needed after the nicotine bomb,  of the first third. The second half of the Arandoza Red was much lower in strength and body. It almost felt like I was smoking a completely different cigar. After the sweetness fades, the profile was mostly dominated by leather, and sorghum like sweetness. Also, there are some very faint hits of hay and earth.

The Arandoza Red is hands down the best cigar Arandoza has put on the market to date. The construction was flawless, flavors were enjoyable, priced well, and while it wasn’t overly complex it was enjoyable. The construction on this Arandoza Red is flawless from top to bottom on the exterior, and the cold draw leads me to believe that the internals are no different. The prelight has scents of spicy tobacco and hay, with tobacco, hay and spice on the cold draw. The first third starts off with some very strong powdered chocolate flavors, followed up with a strong spice on the retrohale. After the cocoa backs down, it allows a bit of earth and red pepper to come through, followed by a delicious, sweet honey flavor. In the second third the honey fades out and the red pepper backs down. The cocoa is still going strong, but it does fade out enough to let notes of stone fruit through. The finish, starting in the final third, becomes very long. Allowing you to savor the new, sweet wood flavor that has arisen. Nearing the end of the Arandoza Red, a graham cracker note makes an appearance, which is nice with the “chewy” profile. Aside from two relights, I had no issues with this cigar. The burn was spot on and the tight ash held on very well. I did not care too much for the Arandoza Blue, but the Red was a complete 180 for me. The Red is a complex flavor bomb, full of deep, sweet notes, that just hit on all cylinders. Easily worth the price, and a definite must try. 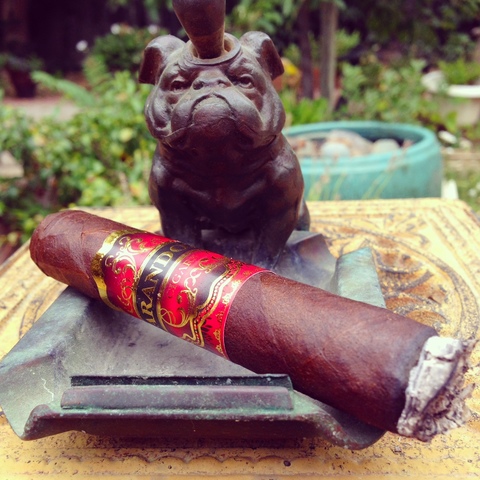 The Arandoza Red (set to be released later this month at IPCPR 2104) is the third release from Arandoza Cigars.  As with the Blue and White (notice a theme there?) the Red was produced at the La Zona Factory in Esteli. Nicaragua.  The Red is also the first full strength cigar produced by Arandoza.  Now let’s get on to the good stuff.

Flavor: The Arandonza Red is not short on flavor.  Right off the bat I was hit with big notes of red pepper, tobacco and dark chocolate.  There were some secondary notes of wood, earth, and smoky/peaty that came and went throughout the second half.

Strength: The Red was a heater!  This baby had big time power and enough flavor to keep pace.  It was a full strength cigar from the get go and, outside of the La Jugada Nunchuck (also produced at the La Zona Factory),  one of the strongest cigars I have smoked this year.

Recommendation: I’m not the target market for this cigar, but there were aspects that I enjoyed.  The complexity of flavors was nice and the wrapper was stunning, but the strength was overboard for me.  So, if you want a powerhouse cigar that doesn’t lack on flavor, then you need to get some Anradoza Red ASAP.  Personally, this is a cigar that I would have to be in the mood for.  Occasionally I want to take on a powerhouse and I had a few Arandoza Reds in the humi I wouldn’t hesitate to grab one.   My rating for the Arandoza Red is an 85 AKA “I’d buy a couple” because it’s a solid cigar, but I would not smoke it on a regular basis.

Fantastic reviews. I hope that with new ownership this format is not abandoned. Just kidding!

Docwill - do you think I am going to completely tank it all on my second day :) Naw, man it is going to stay the same.

Just playin' boss man. But if you drop this format I'm outta here!

I love the group reviews! It isn't just taking one score from one smoker, it gives us (the reader) a better idea of the cigars profile. I know for me, I have bought a cigar from reading one of the group reviews and I have also passed on a few. Hope to see many more of these guys, thanks, great review.

Comment by Generally Useful Jared on July 9, 2014 at 11:35am
Aside from the power kick, these sound like some fantastic flavors. I really dug the White, haven't yet had the Blue. May have to check this one out at least once.

The Red was far and away my favorite of the Arandoza offerings... not a big fan of the the blue or white at all... the Red kinda reminded me of the original AKA Respect... Big power and big flavor...

Charlie - thanks brother. Which cigar did you purchase after reading the group review?

Jared - it is worth checking out for sure.

Rob - totally agree. Easily the best Arandoza on the market.

Digging these group reviews.  Nice having a few different POV in what sitting instead of going around finding things and when they were written.  Sounds like a pretty decent cigar with good flavors.