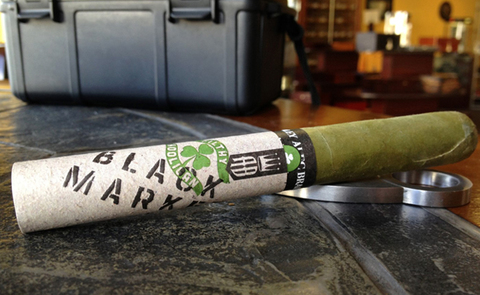 Let’s just get this out of the way: Yes, I bought the Alec Bradley Black Market Filthy Hooligan solely because of the color of the wrapper. There’s been a lot of buzz about this release and I have a feeling that most of it is due to the “gimmick” factor. I’m not saying that all candelas are gimmicky, but this particular cigar and its associated marketing are, without a doubt, fully embracing the feeling that comes along with everyone pretending to be Irish for one weekend in March.

Having never smoked a candela before, I wasn’t really sure what to expect going into this experience. My only real expectations were that the wrapper would be some shade of green, and that it would probably taste like grass. So, let’s dive in, and allow me to share my findings:

Overall Appearance – As I stated previously, whomever was responsible for the marketing behind the (this name is obnoxiously long) Alec Bradley Black Market Filthy Hooligan certainly didn’t shy away from fully embracing St. Patrick’s Day. I’d say that it was a great idea, as some of the communities I frequent, both online and in person, were abuzz with talk about this release. Both bands were quite attractive and were removed without too much issue. The wrapper itself had a fair number of veins running through it, but none were overly pronounced or raised. Very little tooth, if any at all, was to be found on the cigar. The fill was very even and relatively dense. Oh, and did I mention that it’s freaking green?