Warped Cigars was one of the booths I was eager to visit when we arrived at IPCPR 2014 last week.  I had seen and heard a lot about Warped Cigars on Instagram and Twitter and I really want to check them out.  La Colmena (The Beehive) was released at the show along with Flor de Valle (Flower of the Valley). Their first release is called El Oso (The Bear) and features a blue bear face on the band.  We will have a group review of that on in the coming weeks.  Today we're talking about the new La Colmena. 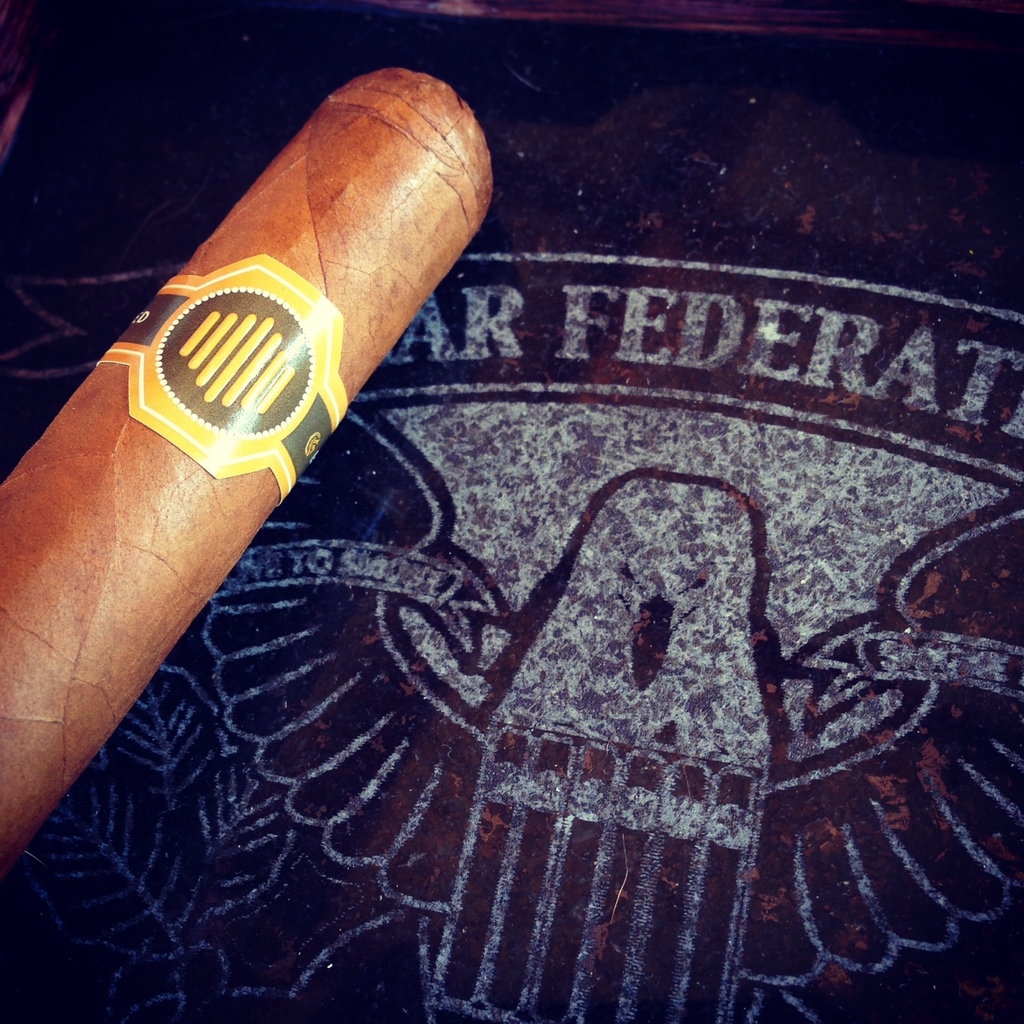 I sat down with the President of Warped Cigars, Kyle Gellis for a quick interview (watch it here) and he handed me a sample of the La Colmena to smoke.  Honestly, I didn't want to smoke it at the time.  It was early in the day, but I had one cigar under my belt already and I was looking forward to smoking it on a fresh palate.  But, when you sit down with the President and he hands you his cigar to smoke during an interview, you smoke it.  I was immediately drawn to the look and feel of the cigar and one I fired it up, I was blown away.

Cigar samples for review were provided by Warped Cigars

Quick Note: For this review I used CigarFederation's rating system.

You can view it in detail here. 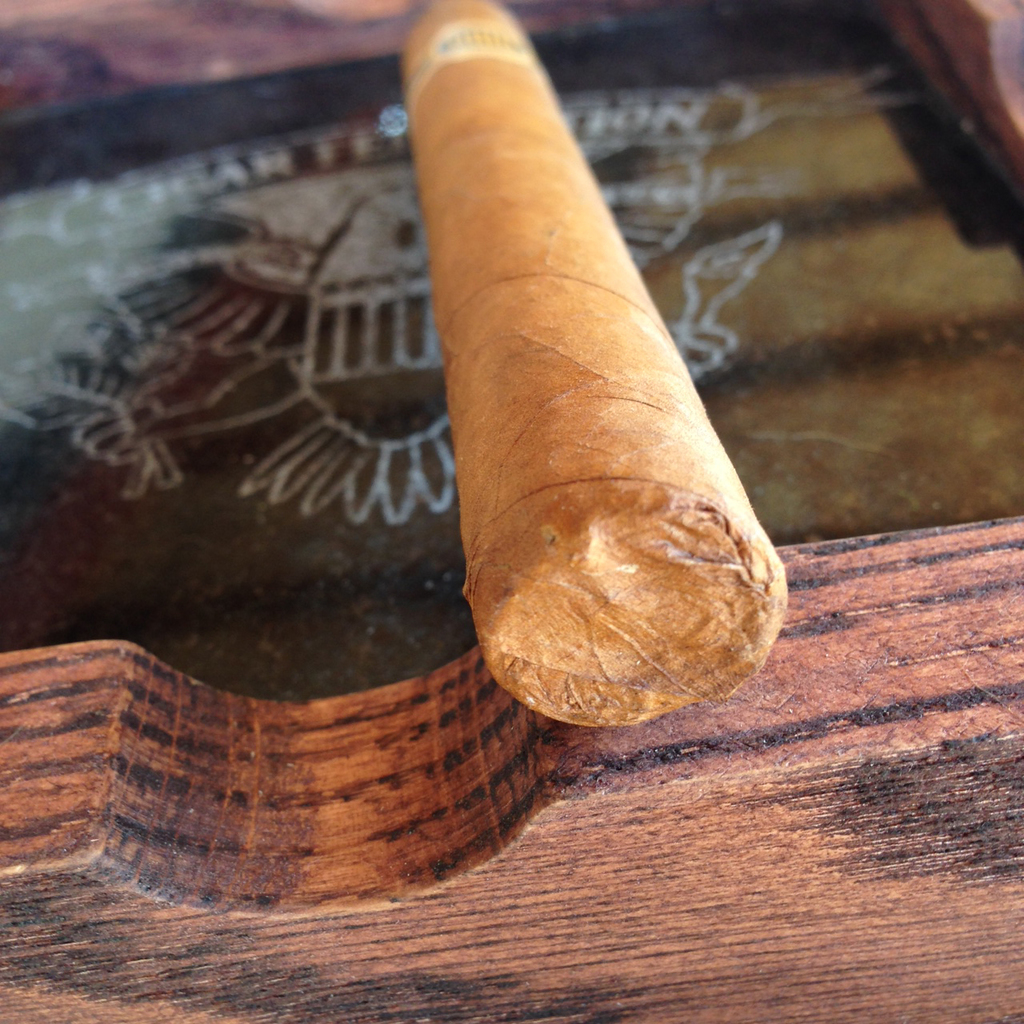 Pre-Light: La Colmena had all the bells and whistles and you all know I am a sucker for that stuff.  First off I loved the size.  That 44 ring gauge is what I tend to gravitate to so the Corona Extra size (5.5 x 44) got my attention.  When you throw in the pigtail cap and the completely closed foot (Kyle called this a "true Cuban covered foot" during our interview), then you have my undivided attention.  The Ecuadorian Deflorada wrapper, which I am not all that familiar with, had a nice golden brown color and smooth texture.  The wrapper gave off toasty graham cracker notes and the cold draw tasted of hay and mild earth.

Only 100 of these cigars are masterfully constructed per day in Little Havana, Miami. 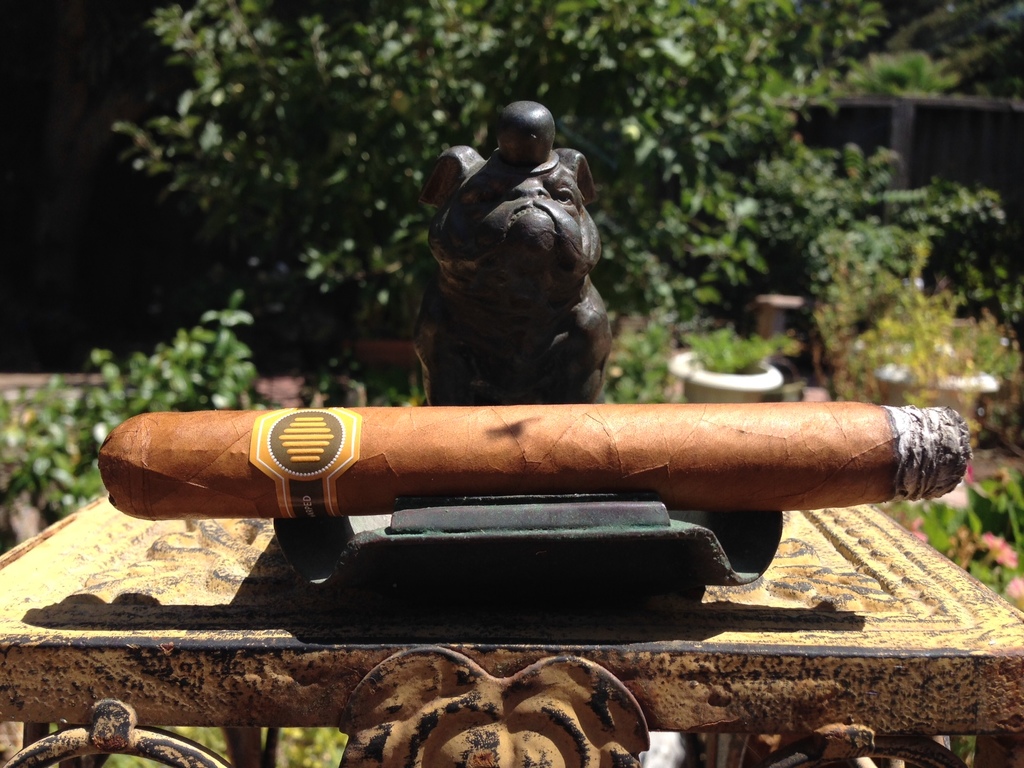 Beginning: La Colmena was an attention grabber.  Upon lighting the cigar I was hit with a wonderful white pepper spice which the Ecuadorian Deflorada wrapper is known for.  It wasn't an overpowering spice by any means, but it was the main flavor component right off the bat.  The flavor profile was toasty with a sweet creamy texture combined with notes of nuts and nugat.  The sweet and nutty flavors reminded of a Big Hunk candy bar and I was hooked.

As I proceeded through the first few inches the spice became present only on the retrohale.  Basically each puff was creamy and nutty sweet notes on the tongue and smooth white spice through the nose.  The balance was perfect.  There were some minor variations on the sweetness as things progressed.  There were notes of cinnamon toast, graham cracker and mild honey that came and went.  These were complementary flavors that never got a firm foothold, but made for a great experience. 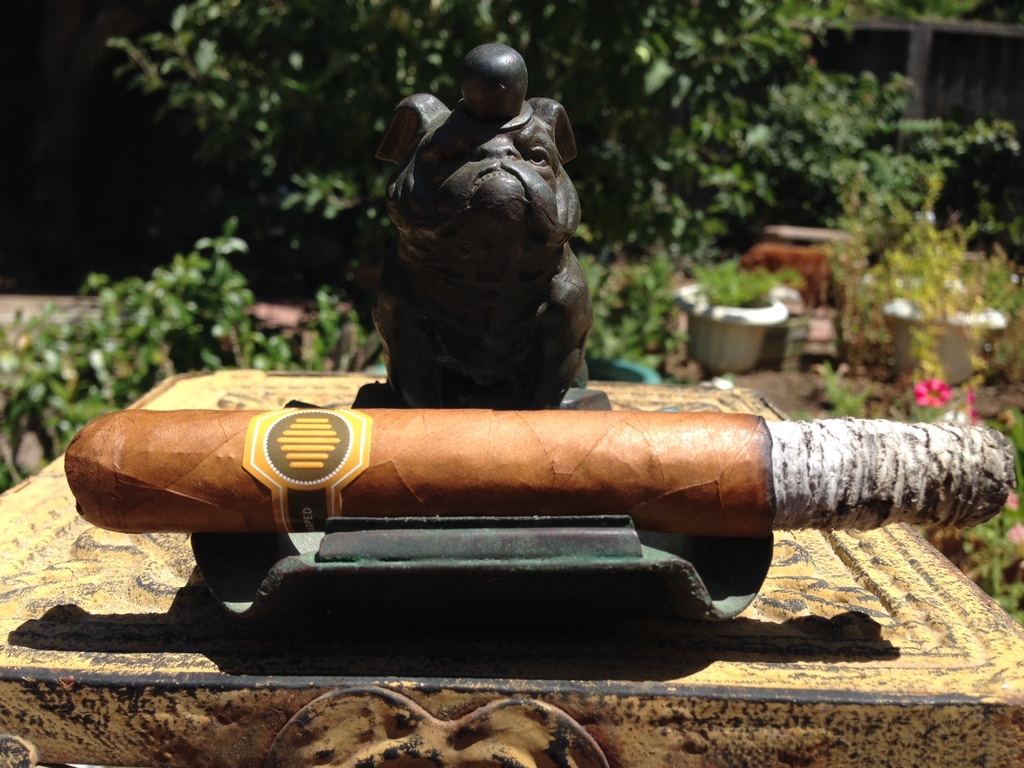 Middle:  The middle portion of La Comlena was interesting.  The sweetness, which I was enjoying immensely, took a few steps back and was replaced by a creamed coffee flavor.  It was much more cream than coffee, which is to say coffee flavor was not very strong.  The spice was now completely removed from the tongue and existed solely through the nose giving each puff an exceptionally clean finish.  The strength, which was a solid medium from the beginning, took a step up to a medium-plus.

The presence of the creamed coffee notes lasted only an inch or so and the nutty sweetness returned to it's role as the main flavor.  The coffee transition, while relatively brief, caught my attention and really sucked me in for the second half.  It was like a flavor intermission. 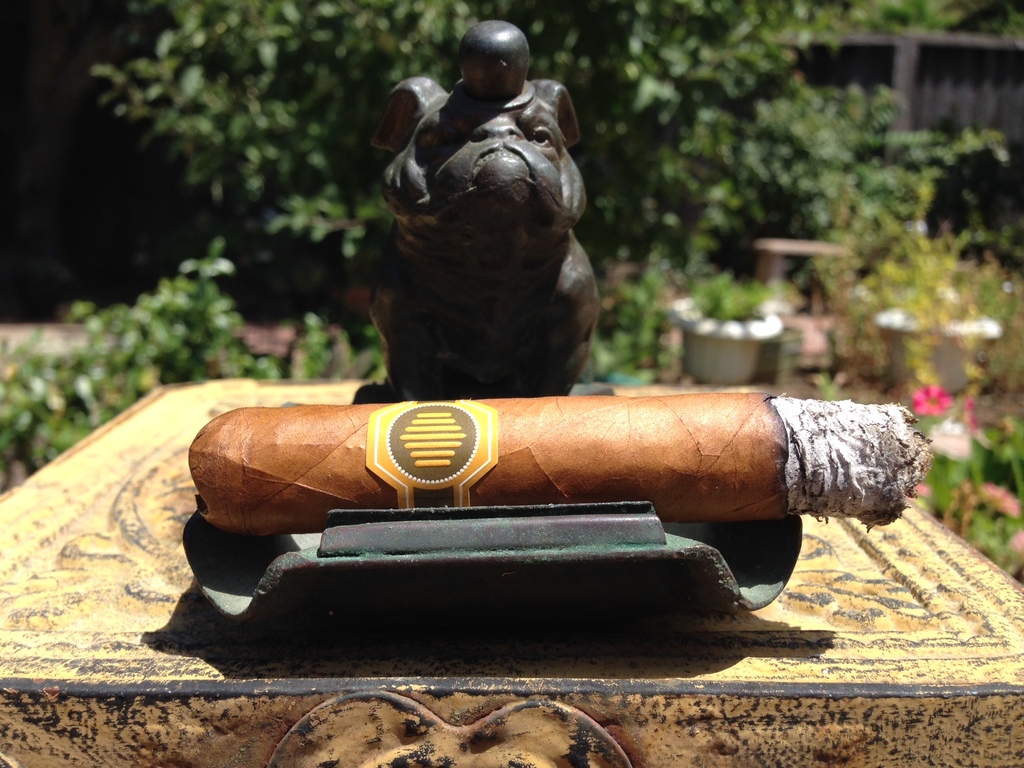 End:  La Colmena ended the same way it started.  Each puff was perfectly balanced with creamy sweetness, smooth nutty notes and finished off with a clean white spice through the nose.  The construction of flavors was something I have never experienced in a cigar before.  Think of it like eating your favorite meal and getting the perfect proportions in each bite.  The perfect example would be Thanksgiving dinner, which happens to be my favorite holiday.  You're eating dinner with the family and you scoop up the perfect amount of turkey, mashed potatoes and gravy.

The cigar finished without any harsh or bitter notes and the smoke remained cool as I reached the nub.  I expected some hiccups given that this particular cigar had been through a lot of travel over the last 2-3 weeks, but there were no issues. 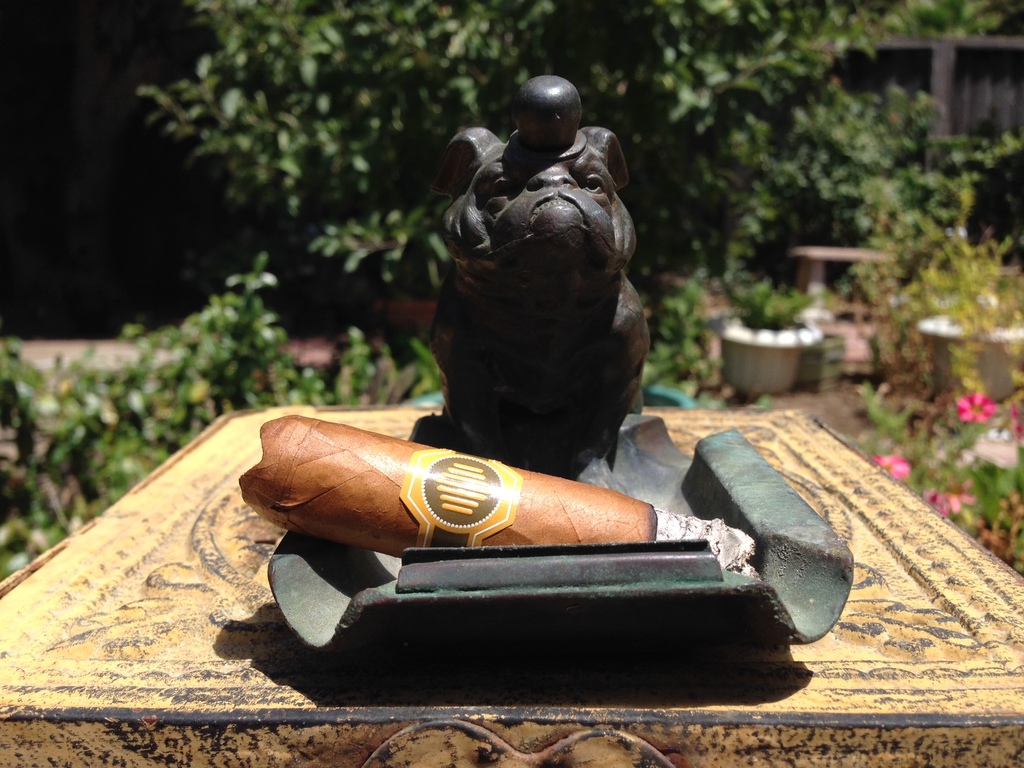 Final Thoughts:  La Colmena provided a near perfect smoking experience.  I really can't think of a better way to say it.  There was a perfect balance of sweet, spice and savory in each puff.  The construction was flawless.  In short, I was completely impressed with this cigar.  There is enough flavor in there to satisfy any type of cigar smoker, though I doubt I would recommend it to an inexperienced smoker.  In all honesty, that would be a waste of a very good cigar.  Someone who is new to cigars will likely enjoy it, but I wouldn't pass these out to any newbs.  Maybe that makes me selfish, but I'm OK with that.

La Colmena is, quite simply, the best cigar I have smoked this year.  In fact, I'm tempted to say that La Colmena is the best cigar I have EVER smoked.  That is an exceptionally bold statement, but it's not a stretch.  If I were on a deserted island and could only smoke one cigar for the rest of my life, La Colmena would be in the running and may be the winner.  Yes, it was THAT good.  The MSRP of $14.50 hurts, but it won't stop my from buying a few boxes and then buying a few more.  Sure, it's expensive, but perfection ain't cheap!

$14 is too high IMO.  Granted, I have not smoked it, but personally even if it is amazing, I won't be buying boxes of NC a that price when there is boutique stuff in that $6-8 range that kills as well.  I am looking forward to checking out the belicoso now.  Great review man.

Nice review. My question is this: where do I find these?

I just ordered my box of the No. 44 and No. 36 (pre-release) I won't actually get them until mid-August. You might be familiar with this wrapper as it is the same wrapper that is on the Chinnok Cellar Terroir blend, this cigar and the Terroir are almost identical in blends but tweaked, The both have the DeFlorada wrapper/Ecuadorian binder/Dominican,Nicaraguan filler...both are rolled at the same factory as well. I personally dont know this for sure but the tobacco might be sourced from the same place? But yea I am super excited to get mine next month. Cigartender.com has them for order now in boxes of 10 and 5 packs.

Charlie - clarify for me - the La Colmena and the Terroir are THAT similar? I enjoy the Terroir - it is a great mild, early morning cigar, but I don't know that its worth $15 a cigar.

They both use the same Ecuadorian Deflorada wrapper....rolled at the same factory.....the specs on both blends are Ecuadorian binder, Dominican/Nicaraguan fillers....like I was saying I'm not 100% sure that both companies source there tobacco from the same outlet but I know that the blend is the same on paper but knowing Kyle of Warped he didn't make a copy of another cigar (it may be a coincidence).

I don't doubt it is a coincidence, but hearing the connection between the two - which makes sense - hurts my hype for the La Colmena a bit.  Don't get me wrong, I really enjoy the Terroir, but it doesn't blow my mind so I worry that the La Colmena will be similar.