If you have not heard of Regius Cigars, you will.  How do I know this?  Because quality is objective, and while the brand was recently only available in the UK, I have perfect confidence success in the US is not far behind.  I am no cigar expert or aficionado, just a collector honing his palate and skills at…

Leccia Tobacco, a Black and a White at the Event, and Custom Rolled Cigar

For some reason I’m a sucker for cigar events (go figure!).  I happened to notice that Sam Leccia was travelling with Jack Toraño, the marketing director for Toraño Family Cigar Co. who is distributing Leccia Tobacco’s new offerings.   So Thursday evening they were doing an event at the CigarCigars stores in Colmar, PA.  They couldn’t have the event at the store that’s 10 minutes… 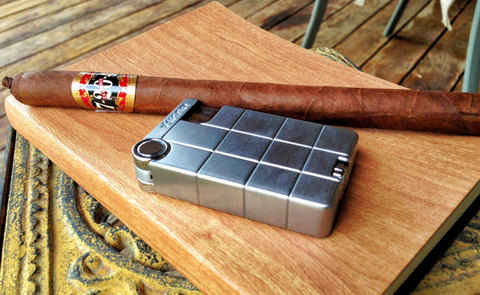 The 7-20-4 Lancero was the first cigar that I smoked from Kurt Kendall and Rick Ardito.  I’m becoming a lancero lover, so I was excited to try this one.  When I saw that it had a Brazilian mata fina wrapper on it, my excitement grew.  I…

Gary Griffith has been drawing raves and making waves with his varied Emilio Cigar offerings for a few years now. Late last year, he went back to one of his early successes — the Grimalkin, a Nicaraguan puro blended in Esteli — and re-branded and re-launched it as La Musa. The initial release in the La Musa lineup is the Mousa, and we’re game for anything Mr. Griffith…

Kurt Kendall and Rick Ardito have  good thing going with 7-20-4 Cigars!  I recently smoked the 7-20-4 Lancero was was quite impressed.  The Brazilian mata fina wrapper is a gorgeous thing.  I’ll have a review up later today.

We will be live with Rick tonight at 7PM EST.  You can watch the show on…

I’ll be honest until this review I haven’t heard much about or smoked a 7-20-4. I found out more information about 7-20-4 after looking at their website.

““Quality Still Impels its Growth”—R.G. Sullivan understood this when he created the famed 7-20-4 cigar and built it into one of the largest cigar manufacturers in the world. From its beginning in 1874, until the Cuban Embargo in 1963, Roger G. Sullivan manufactured the 7-20-4 in…

Summer is heating up and once the again those crazy folks from Burns Tobacconist in Chattanooga, Tennessee, are gearing up for what has been terms “Party of the Year” (or #POTY for those on Twitter). The 2013 Chattanooga Tweet-Up and Cigar Festival will be held on Thursday, August 1, through Saturday, August 3.

Thursday night we will be at Burns East (110 Jordan Drive, just off Interstate 75 at the Shallowford Road exit) for the Tweet-Up Kickoff Party, this year…

Monday evening was rainy. I actually thought there was a break in the showers long enough to take the dog for  walk, but it turned out it was only long enough to get a cigar lit and get a little ways down the road before it started pouring again. I suppose if I had walked farther before it started pouring it would have been worse, as it was I ran the dog home and sat in the garage while I enjoyed my last …

I received this Cielo Poseidon from Corona Cigar Co. to review, about 3 weeks ago, and I finally found the time to squeeze it in.

According to Corona Cigar Company's website, the Cielo was launched back in 2001, and are hand made in Esteli at Tabacalera Perdomo, using an Ecuadorian Sungrown wrapper and an all…

PINELLAS PARK, FL (Wednesday, June 12th, 2013) –– Camacho, the world’s leading brand of bold cigars, today revealed one of the most brazen moves in their nearly fifty-year history. The brand is taking an aggressive stance on the future and aims to reset the bar for bold and full flavored cigars. Nearly all elements of Camacho have been intensified; starting with a bolder brand identity, a fierce assortment of revamped blends, stunning packaging, and an array of killer consumer experiences…

Another week and several more cigars smoked!  This week actually was my birthday week, and while the weather and a busy schedule kept me from really going crazy, I did pull out a few special sticks to enjoy.  Here is a quick take on each - let me know your thoughts:

June 7, 2013 (Miami, Fla.) – In a recent expedition to Lake Nicaragua, which archaeologists feel was once a large bay alongside the Pacific Ocean, a discovery was made. The dangerous mission to find treasures of the mermaid was met by sharks and other seemingly out of place aquatic animals. On the last day, in one of the deepest parts of the lake a cave was located with treasures of the mermaid.

Among these treasures was the Dubloon, a 7.25 x 56 Salomon. The name comes from the…

In an effort to revive, re-blend, and modernize some of their existing brands, tobacco giant Altadis U.S.A. has released the Saint Luis Rey Gen2. The SLR Gen2 is touted as fuller-bodied with a completely different blend than the traditional medium-bodied Saint Luis Rey.

Cigar Stats: The SLR Gen2 comes dressed in an Ecuadorian Sumatra wrapper with a…

Miami, FL June 6th, 2013 – Everybody loves a good sequel, and the Casa Miranda Chapter 2 is set to debut at IPCPR which is being held this year in Las Vegas, NV.

The follow up to the original which was made in Miami at the famed El Titan de Bronze, will be made at My Father Cigars S.A in Esteli, Nicaragua.

According to Jason Wood; VP of Miami Cigar & Company, “Just like any great novel, our story continues to gain momentum with the release of Chapter 2 at…

In recent months, I have noticed quite a bit of social media chatter from Cult…

As you may already know, Craig and I like to include a brief review of each episode’s Half Ashed Cigar of the Week – he does the review for my selections and vice versa. Back in …

Tonight on CigarChat Danny told Rob and I that they are planning to release a Nicaraguan puro with a Habano wrapper at IPCPR. Danny said it should be at a lower price point than their initial La Jugada Prieto with the Mexican SA wrapper.… Hialeah Gardens, Florida (June 6, 2013) - Espinosa Premium Cigars is proud to announce they will be introducing a limited edition cigar for their full bodied 601 La Bomba line called "Warhead" at IPCPR this year.  This is the first time the 601 La Bomba line is offered with a Connecticut Broadleaf maduro wrapper. The Warhead measures 6 1/2 inches by 54 ring and is semi-box pressed with the familiar fuse-like pig tail that is found on the 601 La Bomba line. "Although the wrapper is different,… Last month I went to the CATS Festival in San Antonio, TX. One of the retailers on hand was Outlaw Cigar Co. and they gave out this Gunslinger. The banding on these Gunslingers has been calling my name from that day.

I decided to light up the Short Belicoso Saturday (06/01) night. Forgive the paint and on…